Hot Runner Balance and the Effects of Shear

For years, natural balance has been the cornerstone of a successful hot runner balance. This means that the melt experiences the same flow length and the same diameter melt channels from when it leaves the machine nozzle until it enters each cavity within the mold. This approach has served the industry well.

In recent years, much attention has been paid to the effects that shear has on the melt as it flows through a cold runner system. Of specific interest is how shear heated melt is distributed by the cold runner geometry. Research in this field has led to a greater understanding of shear-induced variances as they apply to cold runner systems and led to the introduction of technologies that are aimed to help address molding issues which have irritated molders for years.

It has also led to a greater awareness of the topic by the general injection molding community. While the majority of published research on this phenomenon has been based on cold runner systems, it has naturally called into question the validity of natural balance principles as applied to hot runner systems.

As a hot runner supplier, Mold-Masters has long been aware of the phenomenon of shear-induced variances that can occur within melt channels and the effect that this can have on the balance performance of a mold.

Uniform balance is always desirable. If a mold is significantly imbalanced, it will be difficult to start up and may have a narrow process window. The balance that can be achieved between cavities on a multi-cavity mold will have a bearing on the part to part consistency. That being said, there are some applications that will require a higher degree of balance than others. These will include parts that have a demanding dimensional requirement or parts that will be difficult to eject if they are over packed. Here uniform balance is important to ensure that all cavities are uniformly filled. It is important to recognize applications where balance will be critical. 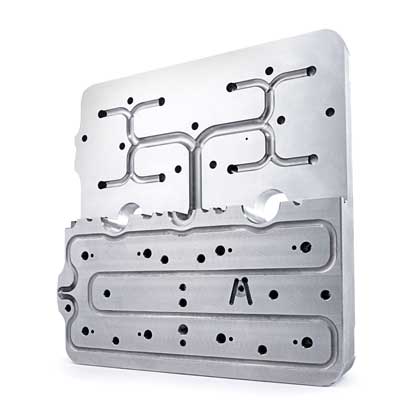 It is good design practice to minimize the size of a cold runner. Consequently, in comparison to the hot runner that may be employed for a similar application, the cold runner is small. For a given injection rate (fill time) this means that the shear rates that the material sees in the runner system will be higher in a cold runner system. When you further consider that the shear rate is inversely proportional to the diameter to the power of three, it is obvious that the smaller sized cold runners will have a significantly greater shear rate and consequently accentuate any shear-induced variations.

Cold runners are typically restricted to a single face of a mold. This means that a cold runner is typically a ‘single level’ runner. Level changes are more easily incorporated into a hot runner design and can be strategically positioned to assist in uniformly distributing shear-induced variances.

In summary, the phenomenon of shear-induced imbalance can occur in a hot runner mold; however, it is much less likely to happen to a significant extent due to lower shear in hot runners compared to cold runners. The phenomenon of shear-induced imbalance is well understood, and its relevance can be anticipated based on the material being molded and critical nature of each application. Hot runner design allows more opportunities to introduce such features as level changes which facilitate uniform distribution of sheared material. 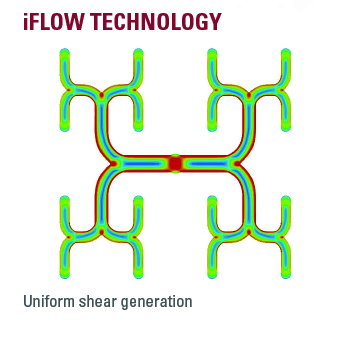 Mold-Masters dedicates its global resources into delivering molds with the best balance performance in the industry. When Mold-Masters technology and decades of experience comes together, anything is possible. Our customers rely on our high-performance capabilities to deliver solutions where others fall short.